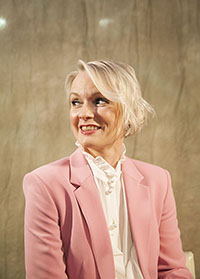 Lorraine Candy is luxury content director at The Sunday Times and editor in chief of Style. Previously editor of ELLE UK, she is renowned in the industry for her digital content innovation. She recently spearheaded an iconic redesign of Style and introduced Style Play, a video-only channel in front of the paywall. Lorraine has also written for The Guardian, The Daily Mail, The Times, The Sunday Times, Good Housekeeping and Suitcase magazine, on topics ranging from parenting and working women, to fashion and travel reviews.

Lorraine is a mother to four children (Sky, 15; Gracie, 14; Henry, 10 and Mabel, 6) and married to James. Her hobbies include running and swimming; for charity, she has completed triathlons, half-marathons and a swim across Lake Geneva in 2017. She is on the media advisory board of the children’s charity Theirworld and also on the membership council of the Tate art galleries. Whenever she can, she likes to return home to Cornwall with her family.