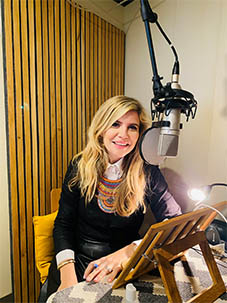 Emma presents Woman's Hour on BBC Radio 4, Monday to Thursday at 10-11am. It is the longest-running women's show in the world. During Emma's time it has become the most downloaded programme across the BBC.

In 2021 Emma entered the US TV market launching a weekly interviews programme called Emma Barnett Meets... on Bloomberg via its streaming platform, Quicktake and international TV channel. Each episode features one high profile guest who sits down with Emma to share their vision.

Emma has been named Speech Broadcaster of the Year at the Radio Academy Awards 2022 and Interviewer of the Year at the British Journalism Awards 2022. She is known for her warm and thorough interviewing style - and securing major exclusives, including most recently the first interview with Nazanin Zaghari Ratcliffe, the British-Iranian charity worker detained by the Iranian authorities for six years.

Previously Emma presented The Emma Barnett Show on BBC Radio 5 Live, for five years. It was a fast-paced daily three-hour programme, during which she interviewed the key figures shaping our times, from the Prime Minister to those would very much like to be....but often her very favourite conversations were with her listeners.

She has also fronted the BBC's election coverage - hosting the marathon eight-hour official radio election programme in 2019 and BBC Question Time - Under 30s Election 2019 - as well as The Andrew Marr Show; Politics Live; Sunday Morning Live on BBC One; Have I Got News for You; The Pledge on Sky News and After the News on ITV.

Emma writes a weekend column for the i newspaper. Prior to her full-time broadcast career, she worked at The Daily Telegraph, where she was first technology and digital media editor and then created and edited its award-winning women's section.

In September 2019 Emma published her first book, Period. It's About Bloody Time. She loathes her period but there is something she loathes even more: not being able to talk about it. Freely, funnily and honestly.

As a live broadcaster, Emma is in her element hosting and talking to audiences at events.

Emma is a proud patron of Smartworks, a charity which helps economically disadvantaged women secure jobs through interview training and having the right outfit to make the best first impression.