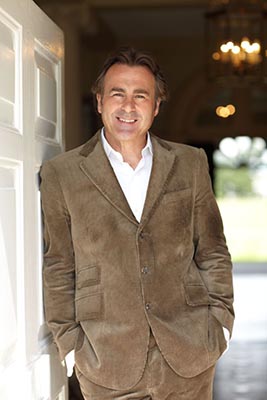 Paul was discovered when he was interviewed about his passion for oak furniture by a team from BBC Bristol. This was the extent of his previous television experience! The team was so impressed by his natural confidence in front of the camera that he was signed up immediately to present the BBC daytime antiques show.

Paul owned an antique shop specialising in 17th & 18th century English and Welsh oak furniture until his television commitments meant that he could not give the business enough of his time. He is obsessed with beautiful furniture and is most eloquent when talking about the look, feel andsmell of wood.

Paul travelled around the UK filming FLOG IT! which meant he was in and out of auction houses and meeting craftsmen all the time. He says “I have learned so much. Meeting people in the antiques trade or people who make their living by skills learned over decades is always a treat.”

Paul was educated at Falmouth Grammar School in Cornwall and studied art and woodwork at Falmouth College. He spent two years as a scenic painter on film sets at Pinewood Studios. From the age of 25 he ran a pitch on Portobello Road and participated in various shop-share schemes. Later Paul worked as an antiques props stylist for magazines like Marie Claire and New Woman, and designed antique sets for TV shoots for the Clothes Show and Granada TV.

Paul enjoys drumming and in the early 90’s played in rock bands like `The Quire Boys’ and the ‘Dogs D’Amour’. He still loves to play in local jazz and blues bands.

He has presented two series of the BBC1 prime-time series BRITAIN’S HIDDEN HERITAGE, THE MANOR REBORN also for BBC1, and PAUL MARTIN’S HANDMADE REVOLUTION- a search for Britain’s brightest and best amateur designer-makers - for BBC2. He has also presented A HISTORY OF WALLPAPER for BBC4 and the ITV series I NEVER KNEW THAT ABOUT BRITAIN.

He has presented two series of STREET AUCTION and MAKE ME A DEALER. His quiz show CURIOSITY was recently broadcast.

Paul has an art and antiques gallery in The Cotswold market town of Corsham, The Table Gallery (please add link Jos)

Paul’s book Paul Martin: My World of Antiques was published in November 2018. In the book Paul reveals hitherto untold stories of fantastic artefact finds, and tells us about the key to success in trading antiques

Paul lives in Wiltshire with his wife and two young children who feature regularly, together with their smallholding, in the BBC1 daytime series COUNTRYFILE DIARIES.