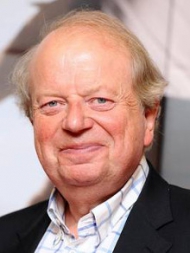 John Sergeant is an award-winning journalist and broadcaster, as well as a much talked-about contestant on STRICTLY COME DANCING, a regular contributor to the BBC's ONE SHOW, the first host of the comedy panel game ARGUMENTAL on the Dave Channel, and presenter of the ITV series JOHN SERGEANT'S TOURIST TRAIL and the BBC’s series on the history of the Indian Railways TRACKS OF EMPIRE. John was the voice of ITV’s popular GRIMEFIGHTER series, presented a mock documentary for BBC2 JOHN SERGEANT MEETS RAB C NESBITT, and an ITV documentary on Father Christmas, THE SANTA FILES. In 2011 John presented a programme in which he flew a Spitfire, BRITAIN'S FLYING PAST, and also a documentary on the only Vulcan bomber still airborne in the BBC's BRITAIN’S HIDDEN HERITAGE.

In 2012, John presented the BBC2 series BRITAIN'S FIRST PHOTO ALBUM, based on the photographs of Francis Frith, the great Victorian photographer. More recent documentaries, for ITV, include SERGEANT ON SPIKE, a celebrating the genius of Spike Milligan, and a profile of the new royal borough of Greenwich ROYAL GREENWICH. He also presented 3 documentaries for BBC2’s BRITAIN’S FLYING PAST about the Spitfire, the Sea King helicopter and the Lancaster Bomber. He narrated ITV's BOMBER BOYS documentary about the WW2 bombing campaign and was invited to read a poem at the ceremony to unveil the Bomber Command memorial in London. John was also one of the few BBC commentators on the Jubilee River Pageant not to be criticised.

In 2014, he presented BARGING THROUGH BRITAIN for ITV, a series about Britain's canals. The second series was transmitted in the summer of 2016.

John appeared in a three-part series based on a sailing trip along the Scottish sea lochs. He took part in the TV version of JUST A MINUTE and was the host for the return of a new series of YES PRIME MINISTER.

In July 2018 John was one of the presenters of POMPEII’S FINAL HOURS: NEW EVIDENCE on Channel 5. In November 2018 John and his old friend and colleague Michael Buerk, both keen sailors, sailed around Britain for Channel 5 in BRITAIN BY BOAT.

A guest on a wide range of radio and TV programmes, including HAVE I GOT NEWS FOR YOU, ROOM 101, QI, QUESTION TIME, and ANY QUESTIONS, John is also a frequent after dinner speaker and host of awards ceremonies. He spent six years touring his one-man show "An Evening with John Sergeant".

John has written two books which made it to the best seller lists: his memoirs, GIVE ME TEN SECONDS and an account of the last part of Baroness Thatcher’s career, “MAGGIE: HER FATAL LEGACY.

John’s first BBC television appearance was in 1966 a few months after graduating from Magdalen College, Oxford where he studied Politics, Philosophy and Economics. He took part in Alan Bennett’s comedy series, ON THE MARGIN which won a Royal Television Society award for Comedy of the Year. John then became a journalist, training on the Liverpool Daily Post and Echo before joining the BBC staff in 1970. He reported from 25 countries and he covered a number of conflicts, including the Vietnam War and the troubles in Northern Ireland, before settling down at Westminster. He was chief political correspondent of the BBC for 12 years. His most famous broadcast was with Margaret Thatcher outside the British Embassy in Paris in 1990 when she heard the devastating result of the leadership contest with Michael Heseltine which would lead to her resignation as prime minister two days later. After thirty years with the corporation, he moved to ITV where he was political editor of ITN from 2000 to 2003. Since then he has worked as a freelance, taking on a variety of roles, including becoming president of the Johnson Society of Lichfield.

John has been married for over 40 years and lives with his wife, Mary, in Ealing. They have two grown up sons, both of whom work in television.