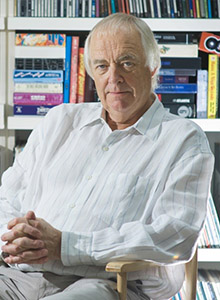 TIM RICE has worked in music, theatre and films since 1965 when he met Andrew Lloyd Webber, a fellow struggling songwriter. Rather than pursue Tim’s ambitions to write rock or pop songs they turned their attention to Andrew’s obsession – musical theatre. Their first collaboration (lyrics by Tim, music by Andrew) was based on the life of Dr. Thomas Barnardo, the Victorian philanthropist, The Likes Of Us. Their next three works together were much more successful – Joseph and the Amazing Technicolor Dreamcoat, Jesus Christ Superstar and Evita.

Tim has since worked with other distinguished popular composers such as Elton John (The Lion King, Aida), Alan Menken (Aladdin, King David, Beauty and the Beast), Bjorn Ulvaeus and Benny Andersson (Chess), and Stuart Brayson (From Here To Eternity). He also wrote two songs with the late Freddie Mercury, featured on Freddie’s album Barcelona with Montserrat Caballé.

He has recently written new material with Sir Elton for the 2019 release of The Lion King as he did with Alan Menken for the 2017 release of Beauty and the Beast.

Tim founded his own cricket team in 1973, which played its 700th match in 2019, and was President of MCC, founded in 1789, in 2002. He was appointed President of the London Library in 2017 in succession to Sir Tom Stoppard. He is a Trustee of Sunderland FC’s Foundation of Light and a Life Vice-President of the schools/cricket charity Chance to Shine. He is a regular broadcaster/presenter on BBC Radio 2, drawing on his extensive knowledge of the history of popular music since Elvis was a lad. He has won several awards*, mainly for the wrong thing or for simply turning up.