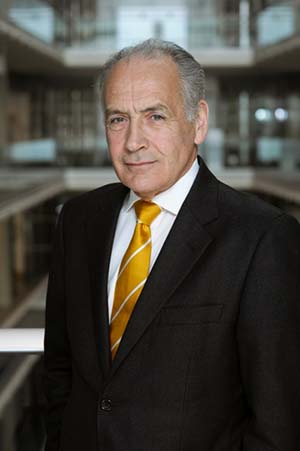 Alastair Stewart presents a range of news and current affairs programmes on the ITV network including “THE ITV EVENING NEWS” and "THE ITV LUNCHTIME NEWS". In April 2010, he moderated the first ever live TV debate between the Party Leaders, ahead of the General Election. More recently Alastair has moderated debates on Channel 5 on the subjects of Brexit and Knife Crime.

His career started in 1976 with ITV's Southern Television, in Southampton. He was a reporter, industrial correspondent, presenter and documentary maker. He recorded one of the last interviews with Lord Mountbatten, and even spent six weeks in Ford Open prison to make a half hour documentary.

Alastair joined ITN as an industrial Correspondent in 1980 and had his first taste of newscasting one year later.

He originally joined New at Ten in May 1989 from ITN’s News at 5.40, which he presented from September 1986. Before that, he spent three years as a presenter and reporter with ITN’s CHANNEL FOUR NEWS. He also presented ITN’s “THE PARLIAMENT PROGRAMME” for Channel Four. He is one of the very few people who has, at one time or another, presented all of ITN’s main news programmes.

In 1990 he was appointed ITN's Washington Correspondent, an assignment abruptly interrupted by the first Gulf War. He was sent to Dhahran, Saudi Arabia, to anchor ITN’s coverage. He presented News at Ten, live from Saudi Arabia, for two months. At the end of February 1991, Alastair was the first British television reporter to broadcast, live, from the liberated Kuwait City. He presented News at Ten from Kuwait for a week before returning to the UK.

Alastair subsequently presented Scottish TV’s special coverage of the gulf War Service of Thanksgiving, attended by HM the Queen, for the ITV network.

He returned to ITV News as an anchor on the ITV NEWS CHANNEL for the 2003 Iraq War, the channel’s Local Government Elections coverage and a special programme on the European Single Currency. He went on to present his own news and interview strand "LIVE WITH ALASTAIR" for which he won the Royal Television Society's Presenter of the Year Award in 2005.

ITN’s network coverage of the 1992 Budget saw the ninth year of Alastair’s involvement in the presentation of this special programme for ITV. It was his fifth year anchoring the programme having taken the role from Sir Alastair Burnet. Since his return to ITV News, he has been a regular presenter of Budget programmes.

He has presented many of ITN’s other special programmes on the ITV network including the State Openings of Parliament, numerous by-elections, State Visits and for the Royal Weddings of the Prince and Princess of Wales and Duke and Duchess of York. Alastair provided live coverage of the Space Shuttle Challenger disaster as the details of the tragedy unfolded. A two minute news-flash became an unscripted, one hour special programme.

He also anchored, with Sandy Gall, ITN’s award winning coverage on the night of the bombing of the PanAm jet over Lockerbie; he also presented ITV’s network coverage of the Memorial Service for the victims. He anchored the ITV Network coverage of the funeral of Pope John Paul II and of the resignation of Tony Blair. In July 2006, at the out-break of the Israeli-Lebanon conflict, he presented all three ITV News network bulletins, for five days, from Beirut.

He jointly presented “CITIES AT WAR” and LEGACY OF WAR” with the late Walter Cronkite for ITV and America’s Public Service Broadcasting network.

Alastair has presented “UNBELIEVABLE MOMENTS-CAUGHT ON CAMERA”” for ITV since 2014.

Alastair Stewart studied economics, politics and sociology at Bristol University and was Deputy President of the National Union of Students, 1974-76.

In the charity world and voluntary sector, Alastair is Vice President of both ACTION FOR CHILDREN and HOMESTART. He is also a Patron of the LORD MAYOR TRELOAR COLLEGE for disabled students; the disablism charity SCOPE; the mental health charity SANE; the medical research charity, HOPE; the CRIMESTOPPERS TRUST; KIDS4KIDS; the brain tumour SAMANTHA DICKSON RESEARCH TRUST; JUST A DROP; the LOOMBA TRUST; and MOMO HELPS, Mo Mowlam's charitable trust; he is a vice Patron of THE ZITO TRUST and THE MENTAL HEALTH FOUNDATION and an Ambassador for INVESTORS IN PEOPLE, CRISIS – the homeless charity - and CARE INTERNATIONAL.

Alastair is involved with a large number of corporate events each year and gets multiple repeat requests. He is acknowledged to be one of the most accomplished conference hosts/moderators on the circuit.