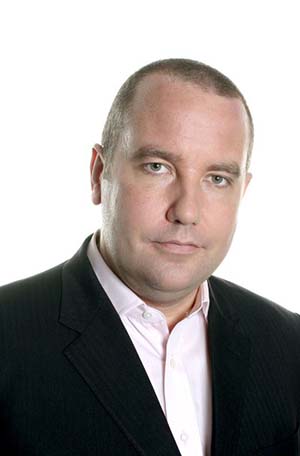 Eddie Mair is, by his own account, one of Britain’s most beloved broadcasters.

Born in Dundee, Scotland, he has worked in radio all his adult life. From the foothills of commercial radio in his hometown, through the sunlit uplands of the BBC in Scotland, he has reached the peaks of his profession, with BBC network radio in London. And he’s never afraid to work a metaphor beyond endurance.

In addition he’s appeared on most of the BBC’s TV channels, including ones that are no longer on TV. He witnessed the handover of Hong Kong and once asked Arnold Schwarzenegger a question –though he takes no responsibility for either.

For twenty years he was at the helm of Radio 4’s PM: a nightly news round-up that meant Eddie worked for just one hour a day. He moved to LBC in September 2018 to host his own afternoon show.

In truth, his neediness is an irritation to everyone who knows him and if you buy his book he might get out of their hair.

Eddie’s other work, as a humanitarian and tireless, secret worker for charity is not mentioned here. His diaries, A Good Face For Radio, were published in November 2017.

‘Broadcasting is all about tone and Eddie Mair, PM's regular host, is its greatest asset’ Miranda Sawyer, Observer

‘There is not, I regret to say, a woman presenter to match the wit, bite, invention and editorial weight of PM’s Eddie Mair. Now I think of it, there’s no man, either’. Gillian Reynolds, Daily Telegraph

‘The BBC likes to talk about journalistic excellence and a tradition of creativity, but really it is an academy for stars. And after Eddie Mair’s careful pinioning and dissection of Boris Johnson on Sunday’s ‘The Andrew Marr Show’, there is a feeling out there that a new one has just graduated’ Leo Benedictus, Guardian

‘I thought Eddie Mair’s interview was one of the most disgusting pieces of journalism I’ve listened to for a very long time. The BBC sank about as low as it could.’ Boris Johnson’s dad, 2013