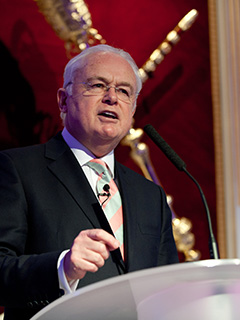 Martyn is an accomplished after-dinner speaker,* chair of conferences, panel discussions and debates, and highly professional narrator whose recent projects include a 2-hour DVD on the 100th anniversary of the RAF, a 3 minute video for Denmark’s Constructive Institute

(see https://vimeo.com/312112075) and a one-hour interview with FW de Klerk and Sir John Major on world current events at an anniversary dinner of the Global Leadership Foundation. In the 2010 and 2015 General Elections in the UK he presented a live closed-circuit interview programme for 1,000 guests at London’s Tate Gallery as the results came in.

He brings to all his work the considerable experience of 32 years as a television journalist, during which he anchored every mainstream national news programme on ITV and BBCTV, including News At Ten and the Six O’Clock News. Running parallel with his broadcasting is his extensive work in the voluntary sector, for which he was awarded a CBE in 1997 and a knighthood in 2016. He founded the UK’s first internet charity, the award-winning YouthNet (now TheMix.org.uk).

A recent chairman of NCVO (the main umbrella organisation for the voluntary sector) and director of IPSO (the Independent Press Standards organization), he is currently chairman of the Queen’s Award for Voluntary Service (part of the UK Honours system).

As a long-time campaigner for "solutions journalism", he remains chair of NCVO’s “Constructive Voices” project and Patron of Positivenews.org.uk. On the business front he is Founder and Executive Chairman of YourBigDay Ltd, offering video “time-capsules” for every date and almost every year over the last century, drawn from the Reuters and ITN archives, and ordered and delivered online (yourbigday.tv).

He is also a Director of PL Education (myperformancelearning.com) and an advisor to Tap Simple (tapsimple.org) and to the Fountain Partnership (fountainpartnership.co.uk).

How Constructive or Solutions Journalism is gaining momentum round the world and in the UK.The importance of volunteering in communities and companies.Reflections on Success, based on personal interviews with over 60 famous people from all walks of life.Why everyone should support their local hospice.Humorous stories from behind the scenes in the news media.