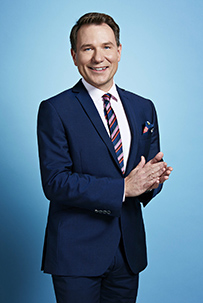 Dear Diary: why, oh, why has it taken me this long to meet - TV’s Richard Arnold, national treasure? Jennifer Aniston

Sure honey, put your hands where ever you like. ’Dolly Parton‘

From Streisand to Gaga, Buble to Tony Bennett, Richard has interviewed many of the world’s biggest stars in recent years, as well as anchoring hours of live TV since he first appeared on BBC2’s youth TV offering The Sunday Show back in 1995.

After two series, he started his long tenure at ITV on GMTV in 1997 before leaving the breakfast station back in 2010. He returned the summer of 2012 by popular demand and following two years on Daybreak is now installed ever weekday with Piers Morgan, Susanna Reid, Ben Shephard and Kate Garraway.

During his long stint at GMTV, he hosted The Richard Arnold Show for two summers, presented ITV’s live tea-time celebrity cook-off Soapstar Superchef alongside Nicki Chapman and three series of Challenge TV’s highest rated original commission to date, quiz show Take It or Leave It from the makers of Deal or No Deal.

TV credits include competing in the 2012 series of Strictly Come Dancing where the grace and favour of the voting public took him all the way to Wembley. He was also a quarter finalist in the first series of Celebrity Masterchef and has taken part in Celebrity Mastermind where his specialist subject was Dallas, the TV series.

In 2003, Richard co-hosted Living’s daily magazine show Loose Lips with Melinda Messenger clocking up over 160 shows, Psychic Live (20 shows) and the Will On Will and Grace audience with star Eric McCormack.

Other TV appearances include The Chase, Pointless Celebrities, Countdown, Tipping Point, Stars In Their Eyes, The Paul O’Grady Show, Ant and Dec’s Saturday Night Takeaway, Celebrity Are You Smarter Than A Ten Year-old, 71 Degrees North, I’m A Celebrity Get Me Out of Here NOW! and competing in 2010’s Sports Relief ‘Let’s Dance…’ as Danny Zuko from Grease alongside Kate Garraway as Sandy during which they made that year’s final.

TV cameos ‘as Himself’ include ITV’s Footballers Wives and C4’s acclaimed drama Shameless. ITV’s Rock Rivals, BBC1’s Hustle and alongside Max Beesley in ITV drama Is This Love?

Films include 2011’s crime thriller Blitz with Jason Statham and David Morrissey - and this summer’s highly anticipated Ab Fab: The Movie - both as himself.

During his brief hiatus from morning TV from 2010/11, Richard hosted his own talk show on London’s LBC 97.3, taking him back to his roots in radio which began  the early 90s as a contributor at BBC Radio Scotland, followed by three years at BBC Radio 5 Live alongside Eddie Mair. Richard also hosted his own daily and weekend radio shows on London station Liberty Radio for three years.

Richard writes weekly columns for Hello! (since 2010) and Woman’s Own magazine (since 2007) as well as contributing to The Sun, The Mail on Sunday, The Express, News of World and no end of magazine credits on matters TV, lifestyle and travel

He is a regular host of many charity events, fashion shows and awards ceremonies. His main corporate client is British Telecom, helping in recent years with their campaigns for Comic and Sport Relief, as well as hosting their Hyde Park Olympic coverage in 2012.

He lives in North London and has recently acquired a cockapoo called Clementine.